Showing posts with the label Cleveland Movement
Show all

3 Occupy Cleveland members sentenced for plot to bomb Ohio bridge near Cleveland: Mayor Jackson had kicked Occupy Cleveland off of Public Square in Cleveland, some say the men were railroaded for fighting against foreclosure fraud in Cuyahoga County by judges, county sheriff, other public officials, others say their alleged talk of violence, which was never acted upon, was against the doctrine of Occupy Cleveland and destroyed the local movement, the 3 White men sentenced were given housing, food, drugs by FBI informant that their attorneys say lured them into a government sting because of their affiliation with Occupy Cleveland 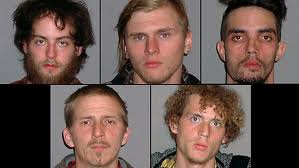 From top left Connor Stephens, Brandon Baxter and Douglas White, all former members of Occupy Cleveland that U.S. District Court Judge David Dowd Jr.  of the Federal District Court of the Northern District of Ohio in Cleveland sentenced to prison terms on Tuesday after the trio pleaded guilty earlier this year to a plot to bomb an Ohio bridge between Akron and Cleveland. From bottom Anthony Hayne, 35, (bottom left) who has not been sentenced after pleading guilty and agreeing to help federal prosecutors, and Joshua Safford, 23, whose case is still pending as  he undergoes psychiatric analysis. Shaquille Azir, 39, below, the FBI informant that gave the Occupy Cleveland members sentenced on Tuesday to prison by Federal District Court Judge David Dowd housing, food and drugs to allegedly lure them into using dummy explosives in a plot to blow up an Ohio bridge between Cleveland and Akron earlier this year Occupy Cleveland members, below, march in Cuyahoga County, Ohio again
Post a Comment
Read more
More posts