Showing posts with the label Christian Business League
Show all 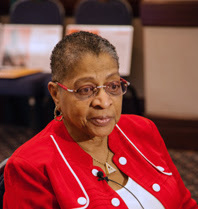 Connie Harper By Call and Post reporters CLEVELAND, Ohio –  Nationally recognized associate publisher and editor of the Cleveland based Call & Post Newspaper, Constance D. Harper, has received the   Business Trailblazer Tribute, which was recently  presented by the Christian Business League at the “Faith and Finance” breakfast  at the Greenmont Party Center in greater Cleveland.  The  Business Trailblazer Tribute  recognizes individuals who are senior in their career for their outstanding and unique business contributions.   Harper is a graduate of Central State University and began her professional career as an elementary school teacher in the Cleveland Public School District, now the Cleveland Municipal School District Later she became the women’s editor and city editor for the Call & Post. She was once selected as one of two journalists to complete a fellowship in urban studies at the University of Chicago. Additional career highlights took her to New York Ci
Post a Comment
Read more
More posts