East Cleveland mayoral primary election candidate Una Keenon to sue after board of elections refuses to place her name on the November ballot to oppose Mayor Brandon King, whom she came in second place to as a Democrat in the primary, Keenon and her attorney arguing that a city charter amendment mandates the top two candidates, without regards to partisanship, advance for the November election, the board of elections agreeing that the charter language is conflicting but saying a partisan primary election has precedence....For now, Mayor King faces Green Party candidate and community activist Devin Branch for the November election....East Cleveland is an impoverished Black suburb of Cleveland....By editor Kathy Wray Coleman of ﻿Clevelandurbannews.com and Kathywraycolemanonlinenewsblog.com, Ohio's most read Black digital newspaper and Black blog 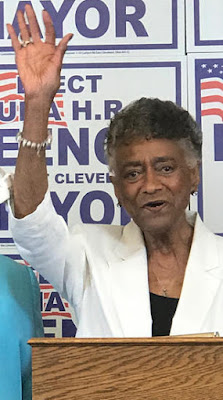 Una H R Keenon waves to supporters at a campaign event at her campaign headquarters in East Cleveland prior to the Sept 12 primary election for East Cleveland mayor Pictured are  candidates for the 2017 Sept. 12 East Cleveland mayoral primary of Democrats Mayor Brandon King, Una H.R. Keenon, and Mansell Baker and Green Party candidate and community activists Devin Branch (Not pictured-Dana Hawkins Jr.). That election is now in discrepancy  per a city charter amendment in 2002 that has what some argue has conflicting language as to whether primary elections are partisan relative to primary elections in the 95 percent Black city, an impoverished suburb of Cleveland ﻿ Clevelandurbannews.com and Kathywraycolemanonlinenewsblog.com , Ohio's most read Black digital newspaper and Black blog with some 4.5 million views on Google Plus alone.Tel: (216) 659-0473 and Email: editor@clevelandurbannews.com. Kathy Wray Coleman, editor-in-chief, and who trained for 17 years a
Read more
More posts