Showing posts with the label Jail Coalition protest
Show all 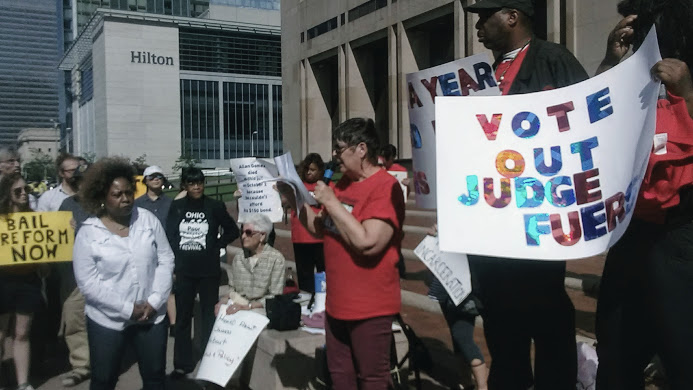 Community activists who called for the ouster of Cuyahoga County Court of Common Pleas Judge Nancy Fuerst during a rally against conditions in the Cuyahoga County Jail at the Justice Center in downtown Cleveland earlier this year picketed again on Oct 8 against  jail conditions, Fuerst, other judges, and a host of other issues. Activists say the judge is unethical and unfair and is allegedly obstructing justice in her attempts to destroy innocent Black activists who are defendants in her courtroom in malicious cases involving KKK-type White cops who have allegedly harassed them. She blatantly disregards the law they say, and should be investigated by authorities  for alleged public corruption activities.  Speaking at the protest above is activist Carol Steiner, and standing is Black on Black Crime President  Alfred Porter Jr. CLICK HERE TO WATCH THE LIVE FACEBOOK VIDEO OF THE MAY 23 RALLY AGAINST CONDITIONS IN THE CUYAHOGA COUNTY JAIL BY CLEVELAND CHANNEL 3 NEWS By Kathy Wr
Post a Comment
Read more
More posts