Showing posts with the label contempt
Show all 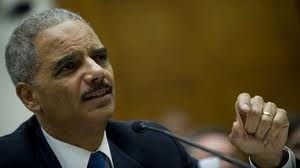 United States Attorney General Eric Holder By Kath y Wray Coleman, Editor, Cleveland Urban News. Com and The Kathy Wray Coleman Online News Blog.Com ( www.kathywraycolemanonlinenewsblog.com ) and ( www.clevelandurbannews.com ) WASHINGTON, D.C. - By a vote of 255 for and 67 against that came along party lines, the U.S.  House of Representatives  moved Thurs. to hold  America's  first Black attorney general in contempt of Congress in a document dispute pertaining  to a bungled gun-tracking operation, and a majority of the  Democrats  walked out of the congressional chambers during the vote in a show of protest and  solidarity  . Holder , 61, is  the first sitting attorney general and cabinet member to be held in contempt. A former Superior Judge of the District of Columbia and prior United States Attorney, Holder  was appointed to  U.S. attorney general by Obama when Obama took the reigns as the first Black president of the United States in 2009. He was also a member of
Post a Comment
Read more
More posts