Showing posts with the label John Glenn dies
Show all

President Obama comments on the passing of former astronaut John Glenn, also a former U.S. senator from Ohio.....Dead at 95, Glen was the first American to orbit the earth and was succeeded in Congress by the late George Voinovich, a former mayor of Cleveland, Ohio.... Glen received the Presidential Medal of Freedom from President Obama in 2012....By editor-in-chief Kathy Wray Coleman of www.clevelandurbannews.com 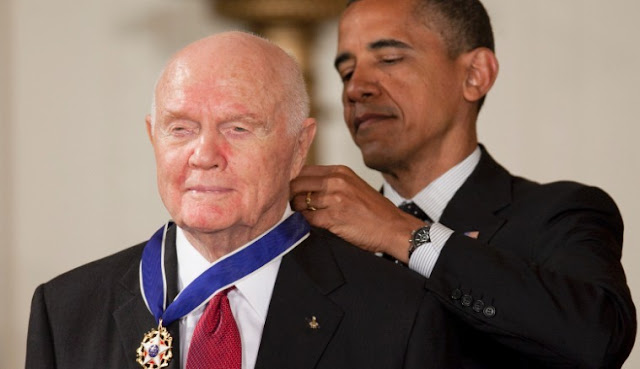 President Barack Obama bestows the Presidential Medal of Freedom on former astronaut  John Glenn, also a former U.S. senator from Ohio, at a ceremony at the White House in May of 2012 By Editor-in-Chief  Kathy Wray Coleman, a-24-year journalist who trained at the Call and Post Newspaper in Cleveland, Ohio for 17 years, and who interviewed now President Barack Obama one-on-one when he was campaigning for president. As to the Obama interview,   CLICK HERE TO READ THE ENTIRE ARTICLE AT CLEVELAND URBAN NEWS.COM, OHIO'S LEADER IN BLACK DIGITAL NEWS .  (Note: A former biology teacher and longtime Cleveland activist, Coleman is the most read reporter in Ohio on Google Plus with some 3.4 million views). CLEVELAND URBAN NEWS.COM, WASHINGTON, D.C.- Former astronaut John Glenn, the first American to orbit the earth and a former Democratic U.S. senator from Ohio, died on Thursday in Columbus, Ohio, a city some 120 miles south of Cleveland.   Funeral arrangements are pending.
Read more
More posts