Showing posts with the label Amanda Knox cleared
Show all 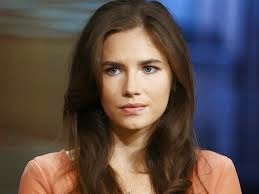 Amanda Knox Rome (CNN)- A tearful Amanda Knox said she is glad to have her life back after an eight-year legal drama that gripped the United States, Britain and Italy. Knox made a brief statement after Italy's Supreme Court overturned her murder conviction late Friday. She was prosecuted after the semi-naked body of British student Meredith Kercher, 21, her throat slashed, was found in November 2007 in the apartment the two women shared. Raffaele Sollecito, Knox's Italian boyfriend, was convicted as well. He was cleared along with Knox on Friday night. "She was my friend ... she deserved so much better," Knox said of Kercher. The Knox-Sollecito retrial Knox had been facing 28½ years in prison. Now she can seek a normal life. She was in the United States when the decision was announced in Rome and issued a statement, saying she was "relieved and grateful." CLICK HERE TO READ THE ENTIRE STORY AT CNN.COM
Post a Comment
Read more
More posts