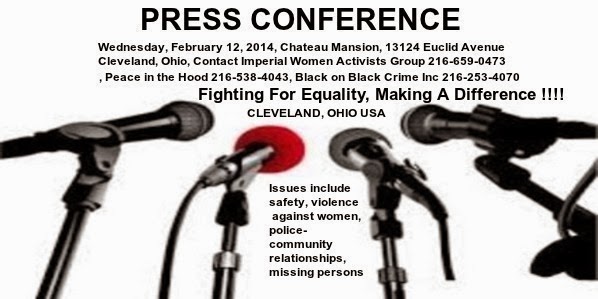 From the Metro Desk of  Cleveland Urban News. Com and The Cleveland Urban News.Com Blog,  O hio's Most Read Online Black Newspaper and Newspaper Blog. Tel: 216-659-0473   ( www.clevelandurbannews.com ) /   ( www.kathywraycolemanonlinenewsblog.com ) CLEVELAND, Ohio-Greater Cleveland community activists groups  that fought for diversity in the leadership ranks of the Cleveland Police Department and have protested around the epidemic of rape and murder against women and other crimes as well as the gunning done in November 2012 of unarmed Blacks Malissa Williams and Timothy Russell by 13 White police officers, will have a dialogue on race and an open-to-the-public press conference and discussion on the appointment on Monday by Cleveland Mayor Frank Jackson  of new Cleveland Police Chief Calvin Williams, who is Black. The press conference is at 4:45 pm on Wednesday, February 12, 2014 at the Chateau Mansion  at 13124 Euclid Avenue. Contact persons are Khalid Samad of Peace in the
Post a Comment
Read more
More posts