Showing posts with the label Attorney Fred Crosby
Show all

Shaker Heights Judge K J Montgomery is a racist drunk who issues high bonds against Blacks and uses Black attorneys that practice in her court to serve as judge in her place to maliciously prosecute Black people, data show and says journalist and community activist Kathy Wray Coleman.....Coleman beat a malicious misdemeanor charge and was allegedly told by a White juror after trial that Montgomery, who is White and recused herself from the case and assigned Black attorney Fred Crosby to sit in for her, sat in the backroom during jury deliberations and tried to push a conviction on illegal jury instructions... Attorney Terry Gilbert was Coleman's hired lawyer in the criminal case....Coleman said that she sued for malicious prosecution and then Judge Timothy McGinty, now a vicious county prosecutor ousted in last week's election, harassed her when she was alone in his office and in the case and has continued stalking her for 10 years.....Coleman says that Brelo trial court judge John O'Donnell has stalked and sexually harassed her for 12 years using a civil case and her University Heights home for bate in a case that has no plaintiff and without her mortgage company, JPMorgan Chase Bank, suing her......Coleman says that McGinty and O'Donnell are racist, sexist, corrupt and mentally unhinged.....By www.clevelandurbannews.com, Ohio's leader in Black digital news 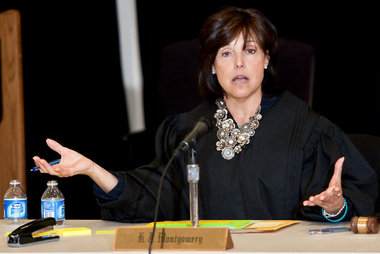