Showing posts with the label AMBER Alert
Show all 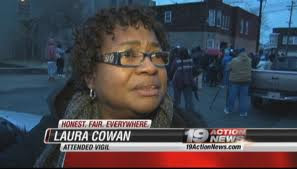 Laura Cowan, an anti-domestic violence advocate, speaks to 19 Action News during a vigil held after the bodies of 19-year-old Latasha Jackson and Jackson's one-year-old daughter Chaniya Wynn were discovered by police in a garage on Cleveland's majority Black east side. An AMBER Alert issued by Cuyahoga County that might have prevented the tragedy faulted twice. By Kathy Wray Coleman , Editor of Cleveland Urban News.Com and The Kathy Wray Coleman Online News Blog,.Com ( www.kathywraycolemanonlinenewsblog.com ) and ( www.clevelandurbannews.com ) CLEVELAND,Ohio-A CNN community hero and community activist whose baby's daddy is serving a life sentence for holding her hostage in her home garage and raping her in front of her then two children is calling for Cuyahoga County officials to do better with the AMBER Alert in the wake of the kidnapping and murder of a young Black mother and her young daughter by a disgruntled ex-boyfriend two weeks ago. "It is neglig
Post a Comment
Read more
More posts